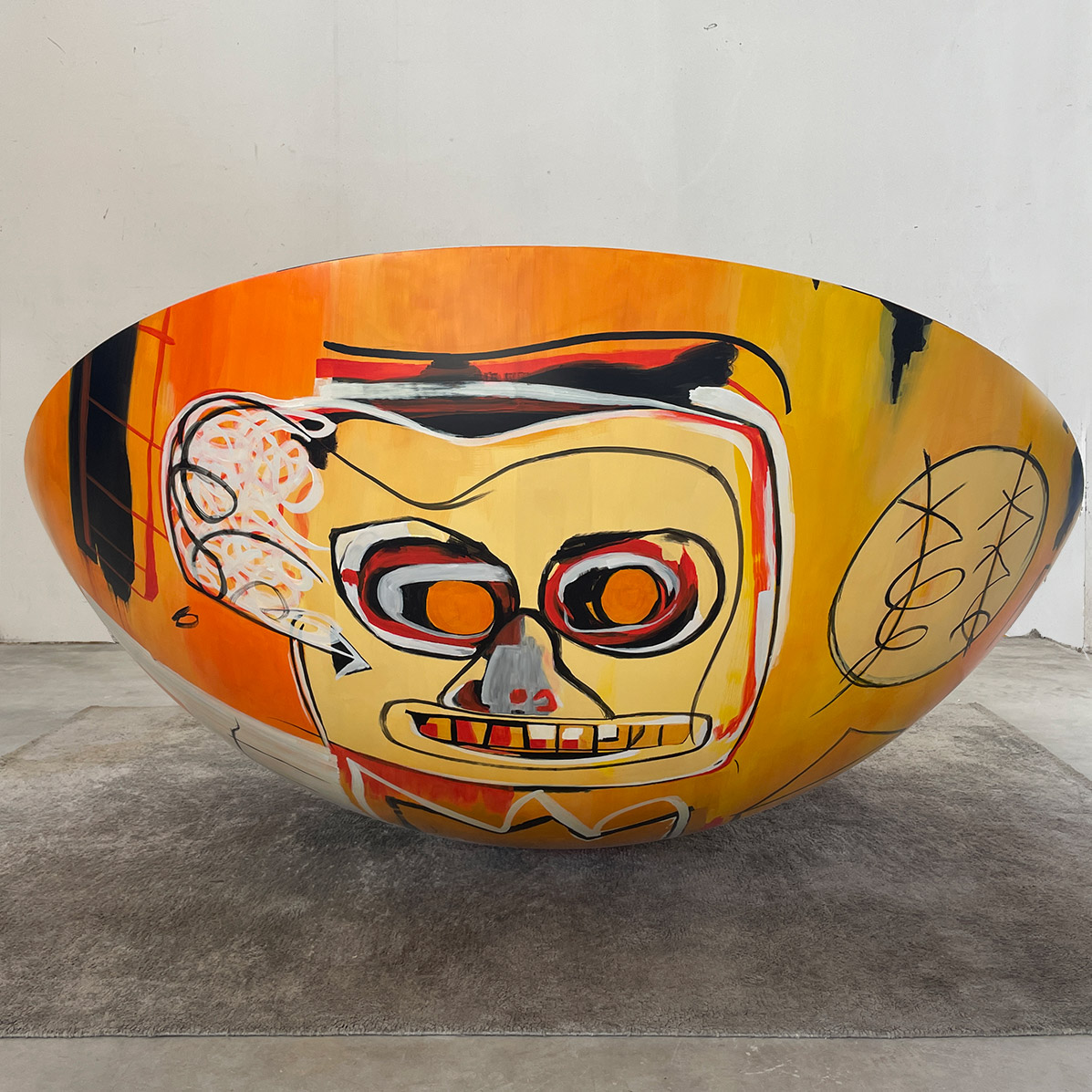 Jean-Michel Basquiat was born in New York to Haitian and Puerto Rican parents in 1960, as a result of this mixed heritage and the cultural melting pot of Brooklyn he was fluent in both French and Spanish. An iconic artist, founding father of American graffiti and one of the most successful geniuses of the last century. These are some of the reasons why Mavimatt decided to create the UFO armchair dedicated to Basquiat.

Basquiat displayed a talent for art in early childhood, learning to draw and paint with his mother’s encouragement who made time to take him to the Museum of Modern Art and the Brooklyn Museum. She also gave him a copy of Gray’s Anatomy, whose anatomical drawings had a lifelong influence on his career.

In the late 1970s, he and his friend, the writer Al Diaz became known for their spray painting with the alter ego of SAMO ©, an acronym for “SAME old shit”, a series of cryptic statements which began to attract attention from the art world and the graffiti scene in New York. The SAMO pieces were largely text based, and communicated an anti-establishment, anti-religion, and anti-politics message.

When Basquiat and Diaz had a disagreement and decided to stop working together, Basquiat ended up being homeless, supporting himself by dealing drugs, and selling hand-painted postcards in downtown clubs, where Andy Warhol bought one of them.

In 1980s, two members of the city’s art scene have just met. Andy Warhol and Jean-Michel Basquiat become close friends and collaborators as they plan to hold a joint exhibition, which promises to be the greatest in the history of modern art. On one side Warhol, the Pop art superstar, desperate to maintain his hold on the art scene. On the other, Basquiat, the explosive new talent, a graffiti artist imbued his canvases with a spiritual power. Anyway, their lives were marked by complex and painful events. On year later the death of Andy Warhol, Basquiat died of a heroin overdose in his apartment in 1988 at the age of 27.

How the UFO Rocking Chair dedicated to Basquiat was born

Why Mavimatt created an UFO Rocking Chair dedicated to Basquiat? We wanted to pay homage to an artist who has never ceased to surprise us and has created some of the most expensive works that have ever been sold.

Some of these works are now in museums, exhibitions but also owned by private collectors including one of our customers who commissioned us a UFO Rocking Chair dedicated to Basquiat. Hence the idea of ​​recreating a UFO Rocking Chair unique in the world that is now placed in a private residence in Taipei, the modern capital of Taiwan.

To create the UFO Rocking Chair, it took more than two months of work, in fact, one of our client’s favorite works was completely hand paint with airbrush technique on the spherical surface of the armchair by Mavimatt artist, a pure work of the best italian craftsmanship. This spectacular limited edition of the famous UFO Rocking Chair has a seat in natural first grain black leather.

By sharing this article on social media, you help us a lot to make our works of art known, and we will always be grateful to you. Hope you enjoyed this blog post about the UFO Rocking Chair dedicated to Basquiat.

We just finished the UFO Watch BOVET edition, an incredible piece of italian art and design. The pro…

Mohamed Beiraghdary, better known online as MoVlogs, is an Arabic Youtuber and Vlogger based in Duba…